The last time Andrea Hairston brought us one of her staged readings was when we were still at the Vineyard Theater, and it was most memorable! You won't want to miss this!

It’s the not-too-distant future. Public gatherings (including theatre) have been banned, supposedly for public health and national security. Drones control the streets. Bennie, an old actor, sneaks into The Next World Theatre on a dangerous mission to catalogue resources and gather precious artifacts. Perhaps he has another mission; perhaps he’s an Enforcer stooge betraying everything he’s believed in, but he can’t quite remember. Dragons, musicians, and a second actor show up and challenge Bennie to face a past he’d like to forget and a future he wants to give up on. 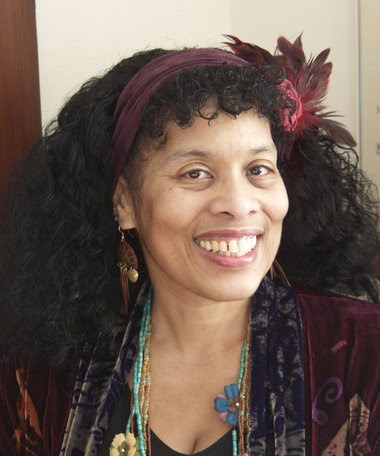 Andrea Hairston is the Artistic Director of Chrysalis Theatre and a Theatre professor at Smith College. Her award-winning plays have been produced at Yale Rep, Rites and Reason, the Kennedy Center, StageWest, and on public radio and television. Since 1997, her sf/f plays -- Soul Repairs, Lonely Stardust, Archangels of Funk, Hummingbird Flying Backward, and Dispatches -- have been produced by Chrysalis Theatre. Also a novelist, Ms. Hairston is the author of Mindscape and Redwood and Wildfire, winner of the 2011 Tiptree and Carl Brandon Kindred Awards. Lonely Stardust: Two Plays, a Speech, and Eight Essays is out this year. These essays and plays broadcast a message of hope and intelligence that defiantly insists that our ability and desire to tell stories defines our humanity and is one of our most valuable resources. andreahairston.com

Pan Morigan is a vocalist, instrumentalist, songwriter, poet, and the music director for Chrysalis Theatre. Her musical adventures have included creating, recording, and performing songs for Andrea Hairston's Redwood and Wildfire, touring with Bobby McFerrin and his all-improvisational vocal group Voicestra, and producing her recent album of songs, Wild Blue. panmorigan.com

James Emery is a founding member of Chrysalis and actor extraordinaire, most recently seen at the Majestic Theatre in 33 Variations by Moises Kaufman and at New Century Theatre in Lend Me a Tenor by Ken Ludwig.

Jerry and Sylvia Johnson entertain the masses with their wonderful R&B outfit, Higher Help, while also stepping out as film performers.

Joy Voeth was singing in Bangkok and relocated to Paris this winter for the next adventure. She flew into Northampton to begin her American tour with Thunderbird.

Ama Patterson, poet and lawyer, makes her theatre debut in Thunderbird.  (Though she read her fiction at a NYRSF Reading some years back.)

Chrysalis Theatre, a cross-cultural performance ensemble, has presented innovative and progressive cultural work in Western Massachusetts since 1978. The multidisciplinary group of artists draws on a range of cultural backgrounds to develop new music-theater productions. In the last thirty-six years, Chrysalis has created over fifty original productions, frequently using the medium of performance to explore social issues. Its productions tour the country from New England and New York to the Carolinas and Florida to the West Coast.

This production is funded in part by a grant from the Northampton Arts Council and the Massachusetts Cultural Council.

After the event, please join us as we treat our readers for dinner and drinks at The SoHo Room.

Jim Freund is Producer and Executive Curator of The New York Review of Science Fiction Readings.  He has been involved in producing radio programs of and about literary sf/f since 1967.  His long-running live radio program, “Hour of the Wolf,” broadcasts and streams every Wednesday night/Thursday morning from 1:30-3:00 AM.  Programs are available by stream for 2 weeks after broadcast.  (Check http://hourwolf.com, follow @JimFreund, or join the Hour of the Wolf group on Facebook for details.)  In addition, Jim is Podcast Editor and Host for Lightspeed Magazine..

The SoHo Gallery for Digital Art is currently hosting Gallery La La Artisan's Market, and for the time being the readings will be held in the downstairs area of the SGDA.  If you have mobility issues, please advise us in advance.

--
The New York Review of Science Fiction magazine is celebrating its 23rd year!
Subscribe or submit articles to the magazine!