Our annual tradition of Family Night continues with one of our favorite families.  What will be different this time out is that we will be returning to the venue we used to kick off the season in September, The Brooklyn Commons at 388 Atlantic Avenue.  The space is right near the the Hoyt-Schermerhorn subway stop (A,C,G); Nevins St. (2,3,4,5); and the Barclay Center (B,D,N,R,Q,2,3,4,5, and LIRR).  You can get there easily!  We will return to SoHo in January. 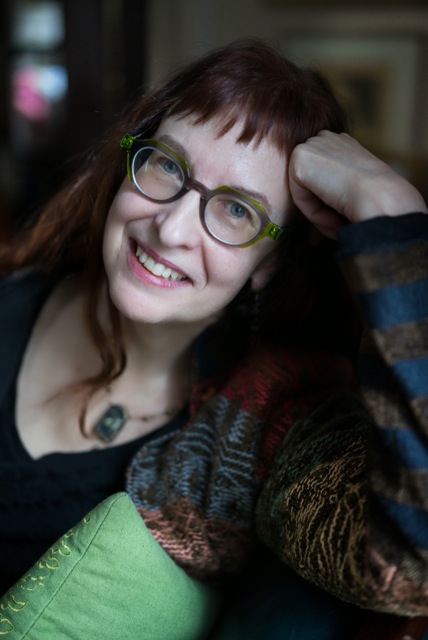 Delia Sherman writes stories and novels for younger readers and adults. Her most recent short stories have appeared in the young adult anthology Steampunk! and in Ellen Datlow’s Naked City. She's written three novels for adults: Through a Brazen Mirror, The Porcelain Dove, and The Fall of the Kings (with Ellen Kushner). She's now turned her hand to novels for younger readers.  Changeling and The Magic Mirror of the Mermaid Queen are both set in the magical world of New York Between.  The Freedom Maze is a time-travel historical about antebellum Louisiana which won the 2012 Prometheus Award and the Andre Norton Award. Her recent collection of short fiction, Young Woman in a Garden, has appeared on PW’s list of Best SF of 2014. She has worked as a contributing editor for Tor Books and has co-edited the fantasy anthology The Horns of Elfland with Ellen Kushner and Donald G. Keller, as well as The Essential Bordertown with Terri Windling, as well as two anthologies of interstitial fiction, Interfictions 1, with Theodora Goss and Interfictions 2, with Christopher Barzak. When she’s not writing, Sherman is teaching, editing, knitting, and cooking. Although she’s frequently on the road, she actually lives in a rambling apartment in New York City with partner Ellen Kushner and far too many pieces of paper. Her website is at http://DeliaSherman.com

Ellen Kushner’s cult classic novel Swordspoint introduced readers to the setting to which she has since returned in The Privilege of the Sword (Locus Award, Nebula nominee), The Fall of the Kings (written with Delia Sherman), and a growing handful of related short stories.  She recently recorded all three novels in audiobook form for Neil Gaiman Presents/Audible.com, and Swordspoint won both a 2012 Audie and Audiofile Earphones Award.  With Holly Black, she co-edited Welcome to Bordertown, a revival of the original urban fantasy shared world series created by Terri Windling, and oversaw the 2013 Brilliance Audio audiobook production with original music by Drew Miller of Boiled in Lead.

A co-founder of the Interstitial Arts Foundation, Ellen Kushner was also the longtime host of the national public radio show Sound & Spirit, and created several one-woman shows for it, including The Klezmer Nutcracker, which she then adapted for New York’s Vital Theater.  She is currently working on a new novel in the “Swordspoint” series.  She recently served as guest host for Fantasy Magazine's Women Destroy Fantasy podcasts. She lives in New York City with Delia Sherman. They have no cats, and she does not like to write in cafes. She loves to read aloud.

We will have cheese, crackers, and cider on hand, plus the Jenna freebie table for all; and a raffle for any who donate.

After the event, please join us as we treat our readers for dinner and drinks nearby.  (Venue to be determined.)

Jim Freund is Producer and Executive Curator of The New York Review of Science Fiction Readings.  He has been involved in producing radio programs of and about literary sf/f since 1967.  His long-running live radio program, “Hour of the Wolf,” broadcasts and streams every Wednesday night/Thursday morning from 1:30-3:00 AM.  Programs are available by stream for 2 weeks after broadcast.  (Check https://hourwolf.com, or join the Hour of the Wolf group on Facebook for details.)  In addition, Jim is Podcast Editor and Host for the Hugo Award-winning Lightspeed Magazine.

The Brooklyn Commons at 388 Atlantic Avenue is an open and collaborative movement building space, only minutes away from the Hoyt-Schermerhorn and Atlantic Avenue subway stops in downtown Brooklyn.  The Commons provides resources to the progressive community including affordable office and meeting spaces as well as an event venue that can host anything from parties and benefits to forums, performances, films and workshops. If you are interested in meeting or event space, please contact them at info@thecommonsbrooklyn.org.

--
The New York Review of Science Fiction magazine is celebrating its 24th year!
Subscribe or submit articles to the magazine!